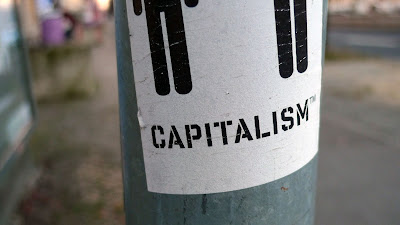 Have you ever read Naomi Klein’s Shock Doctrine?

It’s a fantastic book. It explores the concept of ‘disaster capitalism’: the moment, in the aftermath of something terrible like a war, coup or natural disaster, when corporations seek to achieve maximum corporate benefit at the expense of the public good.

'After a tsunami wipes out the coasts of Southeast Asia, the pristine beaches are auctioned off to tourist resorts.... New Orleans’s residents, scattered from Hurricane Katrina, discover that their public housing, hospitals and schools will never be reopened…. These events are examples of “the shock doctrine”: using the public’s disorientation following massive collective shocks – wars, terrorist attacks, or natural disasters -- to achieve control by imposing economic shock therapy.' Source.

But this isn’t a review of that book. Or a ham fisted attempt to draw parallels between our sector and how evil corporations can behave. That would be silly. It is however a book that has helped me think about the problems facing our sector from a different viewpoint.

One of the many things from the book that has stayed me is the concept of driving real and radical change in the aftermath of disaster. How the things that typically prevent change when things are progressing as ‘normal’ are all of a sudden removed as barriers.

It was this book that introduced me the the economist Milton Friedman. The following quote from Friedman is his take on the point that real change can only happen in the aftermath of crisis.

“Only a crisis - actual or perceived - produces real change. When that crisis occurs, the actions that are taken depend on the ideas that are lying around. That, I believe, is our basic function: to develop alternatives to existing policies, to keep them alive and available until the politically impossible becomes the politically inevitable.” Milton Friedman.

I think it’s fair to say that, we, the UK fundraising sector, have had our moment of shock or crisis.

I also think it’s fair to say that very few organisations were adequately prepared for the aftermath of that shock. To quote Friedman, there weren’t that many ideas ‘lying around’. We didn’t swing into action with the next bunch of ideas that we thought would drive the next wave of fundraising innovation or evolution.

But things seem to be changing.

From where I sit, I can see many organisations and people in the sector realise the most progressive thing to do isn’t to dwell on the past, defend techniques that the public are growing tired and suspicious of, cry about how badly we’ve been treated or take every opportunity possible to say I told you so. The smart progressive people and organisations have already started to do something about it. They’ve started to create the ideas that could redefine the fundraising model.

What’s refreshing is that I don’t think anyone is claiming to have the answer - anyone who does shouldn’t be believed. But, bit by bit, brief by brief I can see multiple charities starting to plot the path towards a new fundraising model.

A consequence of this rapid and radical change may be that some charities, agencies and consultants go out of business as they fail to react to the changing landscape.

It seems that as a sector it seems we needed a shock to change things.
Posted by PDG at 14:27