Ignore all gurus. Read fewer fundraising blogs. (Yes, including this one).

Not least because it includes the following passage, (swop advertising for fundraising and you will see where I'm coming from)...

But there's a problem isn't there? Mailrooms in agencies have all but died out. We don't have one here. We've never had one, but then again we're a tiny company, which is a rarity in the business. But mail rooms are even dying out in the big and very big agencies.So what happens next? Imagine advertising without all the people who worked their way up from the bottom. This is the problem that the business faces at the moment. There are precious few ways for industrious, inquisitive, smart and hard-working people who left school at 16 to work their way into the business.And Jesus, the business needs them now more than ever. It's swamped with nice middle-class university educated people. And there's nothing wrong with them individually. But there is a problem with them as a whole. Advertising has become too nice and too middle-class, too polite and too intellectual.The industry needs to be challenged. We need more variety of people, more trouble-makers, more people who aren't afraid to speak up, more people who don't treat the job like the civil-service or an intellectual exercise.

Looking around our sector, it all looks the same.

Similar people working in the same way with very little challenge to the status quo.

Everything is very polite, radical change to what we do and how we think feels a long way off. And that radical change is more likely to be something that we react to rather than create.

This is not how it's meant to be. So it's our responsibility to change it. Starting today.

Recruit staff from a different sector.

Steal an idea from the commercial world.

Stop thinking that we are different.

Challenge the most senior voice in the room.

Stop pretending you know what you're doing.

Read fewer fundraising blogs. (Yes, including this one).

Stop being so dismissive of the brand team.

Stop thinking that you are the audience.

Start with a blank piece of paper. 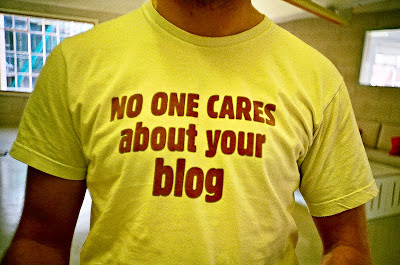