Voice of the Party 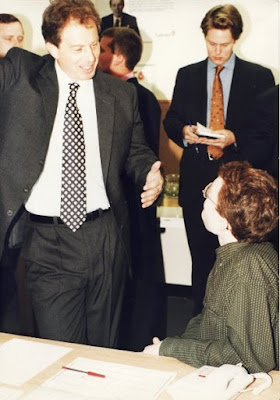 I recently found some old pictures from P&B past. I’m not in this picture. I was probably downstairs clearing a path for Mr Blair to tour the building.

Tony Blair visited the P&B Farringdon Road call centre in November 1996 as the campaigning in advance of the 1997 general election was building at a rapid pace.

I was lucky enough to work on the last three election campaigns that Labour won and even luckier to lead the agency response in 2001 and 2005. I learnt an enormous amount about fundraising when running these campaigns, lessons that I still refer back to now. But maybe more of that in a future post.

What sticks in the memory the most today, is the experience of working with such a committed bunch of fundraisers. It really was one of those occasions where the pride of being part of such a great team drove you through the very long hours and sleep deprivation that comes with a long election campaign.

The teams of fundraisers I worked with in 2001 and 2005 were some of the most committed and passionate people I’ve ever come across. All were committed to the party and all were socially aware people who wanted to be part of real change. I’d like to mention them all but wouldn’t do them justice. Instead I will mention Abigail Frost who sadly passed away in 2009.

Abigail was a part of P&B’s DNA, she was Labour through and through and as well as being a key member of the fundraising team was very active in her local party.  She even worked in the telephone team at Millbank for a few years, sharing her shifts between head office and P&B.

Abigail worked on far more general election campaigns than me.

Abigail was awkward and difficult to manage.

Abigail refused to stick to the script I had written for her.

Abigail never knew that I was trying to capture her voice in all the scripts I wrote.

Abigail once told me in front of 30 fundraisers that ‘this (the script) is one of the worst things you have ever written’.

Abigail was one of the best fundraisers I have ever heard on the phones for Labour. Ever.

I used to ask Abigail not to get side tracked by debating with the members she was speaking to, she never listened. Some of those debates were quite long and the tone of some of them not exactly what you would think would be conducive to fundraising!

But she never generated a single complaint.

The reason for that was that she was an authentic voice of the party, she was a member, she understood the membership and they understood her.

I once heard her say this after 'debating' an area of policy in the manifesto with a fellow member.

“I think of the Labour Party as a beautiful red mosaic Mr Smith, there are many shades of red in that mosaic, but it wouldn’t be as beautiful as it is, unless your particular shade of red was present”

I can remember the call vividly but have changed the name! Re-reading it now, it sounds a little corny unless you ever heard Abigail fundraise, she said it with conviction, it sounded real and it was successful. Mr Smith and his money were soon parted.

It’s people like Abigail who make fundraising campaigns successful, I think we should celebrate them a little more often.

For those of you that know Abigail, there are some photographs here that brilliantly capture her personality.
Posted by PDG at 14:06