Learning from the best...

My first ever client as an account manager was Erica Waasdorp. I worked at a telephone fundraising agency and Erica was responsible at the time for regular giving at IFAW, who were the agency’s biggest client.

Working with Erica so early in my career was brilliant. We talk a lot about agencies and clients working in partnership, only for it all to fall apart when things don’t go so well. Not a whiff of that working with Erica. I could write a long list of the things that I learnt from Erica, but I won’t, as that will only embarrass her. I will limit myself to one thing: the biggest thing I learnt was that it’s OK to try something that doesn’t work and it’s OK to be wrong (from time to time). Removing the fear of failure from the relationship gave permission for all ideas to be brought up, discussed and if we all agreed we would test. As a result we learnt tons.

So when Erica asked me last year to submit a chapter on telephone fundraising for a book she was writing, I was a) proud and a little humbled that she asked me to contribute and b) delighted to say yes! 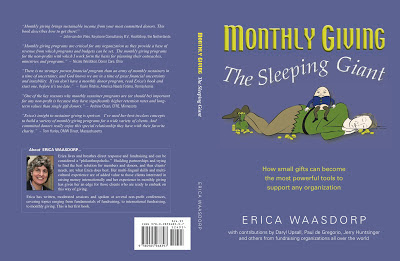 The book has just been published, it’s called ‘Monthly Giving the sleeping giant’ and it’s well worth a read. Details on how to get a copy can be found on Erica’s website.

Erica has been a huge influence on my career and I wish her success with the book. She really does deserve it.
Posted by PDG at 21:40