Why we should all encourage Slacktivism


I don't like the term Slacktivism, if you're not familiar with it, this Wikipedia definition is as good as any...


Slacktivism (sometimes slactivism or slackervism) is a term formed out of the words slacker and activism. The word is usually considered a pejorative term that describes "feel-good" measures, in support of an issue or social cause, that have little or no practical effect other than to make the person doing it feel satisfaction. Blah, blah, blah...

Basically it's doing something relatively small and simple like signing an online petition, sending an SMS, sharing a link or hitting 'Like'.

It's a term I'm hearing more and more from people in fundraising who clearly don't think that interacting with a charity or other non profit in this way has any true value. Which seems an odd stance to take. As fundraising becomes harder, fusing campaigning and fundraising seems like the obvious thing to do.


I recently read a brilliant blog on the subject, 5 reasons not to use the word "Slacktivism". As its title suggests it gives 5 reasons why the term shouldn't be used:


Point 4 got me thinking. When I was starting out in fundraising I would go to conferences and wise people would be at the front of the room talking about the donor pyramid.  The basic concept was that those who take small actions are the people that we should focus on developing, as they were the big givers of the future. Basically the fundraising version of the 'ladder of engagement'.

Complex stuff I know, back then the bottom of the pyramid was a one off cash donation, which if we did our jobs well could eventually lead to a legacy.

I've created this amazing infographic to illustrate the principle. 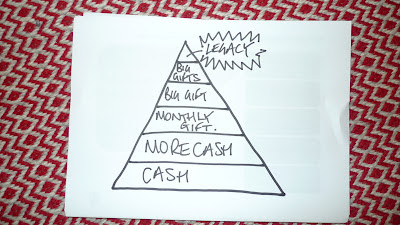 I learnt very quickly that few real people followed the principle. Big gifts aren't given by the majority. If we are really good we can take cash and monthly givers to legacy without ever getting big/major gifts from them... But I digress...

The challenge for people like me (and you) is to develop these small acts of solidarity and make them the start of ongoing support and ultimately long term donations.

So, back to that infographic. Slacktivism is the new first rung! 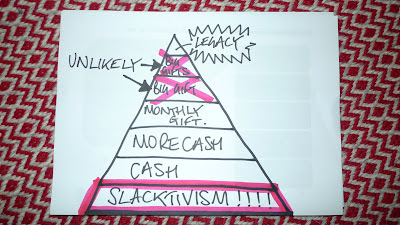