At last week's IFC I was asked to speak at I Wish I'd Thought Of That. I've pasted the words I tried to learn below. 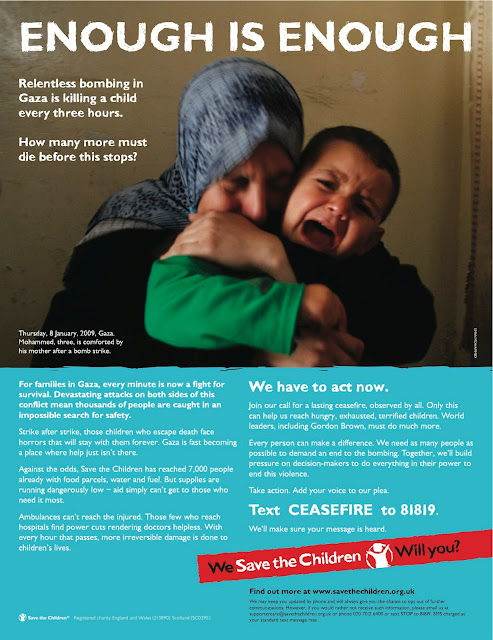 Hello. My name’s Paul de Gregorio and I’m Head of Mobile at Open Fundraising, I’m really honoured to have been asked to talk to you all about the fundraising idea ‘I Wish I’d Thought Of’.
I’m going to talk about Save the Children UK’s 2009 Gaza Ceasefire campaign.

There isn’t a single campaign out there that has inspired me more in my career.
So I hope in a few minutes’ time it will have inspired you as well.
On the 27th December 2008 the Gaza conflict began.
As is always the case in any conflict, in any part of the world, it’s the civilian population that bears the brunt.
So, on the 5th January Save the Children decided to act. They launched a campaign to demand a ceasefire so vital food, shelter and medical supplies could be delivered. And they asked the public to support this demand.
Five days later this ad was run in four newspapers over one weekend.
I love this campaign because it was big, it was bold and it was impactful.
100,000 people responded to the ad by the end of the weekend. 180,000 responded in total.
At the outset there was no fundraising plan. This was a campaigning ask:
Add your voice. Sign the petition. Demand a ceasefire.
But as the scale of the public response became clear, rapid decision making took place at Save the Children which resulted in fundraising becoming central to the campaign.
A telephone fundraising agency was hired to talk to responders about financial support in addition to their petition action. Tests were conducted and rollout was swift.
90,000 calls were made. 10% of those spoken set up a monthly gift. That’s 9,000 new monthly givers almost overnight.

I love this campaign because the creative is brilliant.
Everything about it, the words and the picture, make you want to do something.

It makes you angry, it shocks you, it’s an ask you just can’t say no to.
Look at this image. Taken just two days before the first ad was run. It’s a photograph of Mohammed, a three year old boy being comforted by his mother after a bomb strike. It’s a picture that re-enforces the horror of conflict for children.
And the words; some of the words are incredible.
ENOUGH IS ENOUGH
RELENTLESS BOMBING IN GAZA IS KILLING A CHILD EVERY THREE HOURS.
HOW MANY MORE MUST DIE -- BEFORE THIS STOPS?
And the call to action is perfect:
We have to act now.
Every person can make a difference.
Take action. Add your voice to our plea.
We’ll make sure your message is heard.
Selecting SMS as the only way to respond was inspired. Because sending an SMS takes seconds. You’ve been moved to act and taking the action is frictionless.
I love this campaign because it proved to me that there was new life in UK fundraising…
If I’m honest, at the time this campaign was launched, I was getting a little frustrated at the fundraising techniques being employed in the UK.
Huge volumes of cold telemarketing calls were being conducted to recruit monthly givers, targeting responders to mail, telephone or online surveys.
In order to drive these massive volumes, there was a huge growth in the number of companies selling these lists to charities. And no shortage of charities willing to test them.
But to me it felt as if the people being called had displayed no real engagement in the charity calling them beyond ticking a box.
The Save the Children Gaza campaign proved that there was another way. That investing in campaigning actions was as effective, if not more so, than simply ‘buying’ prospects.
That if you could drive a genuine emotional engagement with your cause, you could take people on a journey to other methods of support.
Speaking of which I love this campaign because it proved that when fundraisers and campaigners work well together amazing things can happen…
I’ve spoken to a lot of people at Save the Children about this campaign. And the most striking thing is that fundraising was never part of the initial plan.
This was a campaign to mobilise the support of the public. Not to raise money.
But the quick thinking and acting of the senior team at Save the Children meant that this outpouring of support for the issue of the day was effectively translated into monthly donations.
There is a lot of talk in charities all over the world about the need to remove departmental silos. To align organisations behind the needs and wants of the beneficiary and supporter.
This campaign is a fantastic example of what is achievable when smashing silos becomes a reality and not just a buzzword
And last, but by no means least, I love this campaign because it was genuinely transformational for UK fundraising…
It showed us that it was possible to drive mass engagement with a non financial, but cause led proposition. Something that is common place now.
It showed us that mobile, specifically SMS, was a critical tool for fundraising and activism and it was the catalyst for a huge growth in the use of mobile to recruit and retain supporters.
And for me personally, it’s the campaign that gave me the inspiration to do the job I strive to do well today. To fuse creative, strategy and technology to create campaigns that bring huge numbers of people towards amazing causes and hopefully help change the world.
And that’s why the Save the Children Gaza appeal is the campaign I wish I’d thought of.
Thank you.