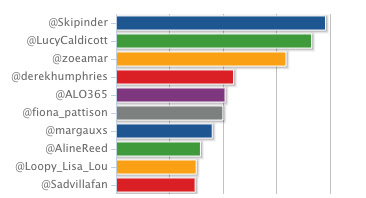 TweetStats tells me that these people are the people I interact with most frequently on Twitter.

I've no idea how it works it out but it seems about right. As the 10 people listed above are some of my favourite Twitter people. With the exception of number 10, my brother, he's one of my favourite people, full stop.

They all use Twitter in the way that I like the most. They share, talk to and engage with people - none of them are stuck on broadcast, shamelessly self promoting. They are people who genuinely care about the fundraising sector and I would encourage you to follow them all - even my brother (who will delight you with tales of being a Dad to A & R and his wonderful wife K).

@Skipinder; funny, Scottish and curator/creator of the best charity crowdsourced friday Spotify playlist ever, that's ever.

@LucyCaldicott; Lucy seems to be far too busy to spend anytime on Twitter. Once seen singing the 'da na na na' bit of Reflex with Simon le Bon. The next big thing in fundraising.

@Zoeamar; one of the nicest women in the third sector. She makes me laugh a lot and I plan to have coffee and cake with her in the new year.

@derekhumphries; the nicest man in fundraising, this man is a legend, plain and simple.

@ALO365; passionate about fundraising and another rising star.

@fiona_pattison; the cliche is that you should always hire people who are smarter than you. Fiona is the newest recruit to the mobile team at Open, she is smart, funny and a fellow Somersetshire ex-pat. What's not to like?

@margauxs; Canadian. Clever. Loves birds. Margaux is a name you will hear a lot, if you are serious about a career in fundraising.

@AlineReed; we once leant against the same wobbly bar to prop it up, something I hope to do again in 2012. Aline will write the next must read book on fundraising and retire to Birmingham where she will buy her favourite team and invite me to see the game every week. Probably.

Lists are a bit odd though as they have to stop somewhere, there are plenty more brilliant people that I interact with on Twitter - have a flick through the list of people I follow, and take your pick, nearly all of them are lovely!