IWD: most of my heroes don’t appear on no stamps…

For IWD we were asked at work to tell the story of one of the inspiring women in our lives. This is what I wrote.
This is Antonietta de Gregorio is my Italian Grandmother (Nonna). 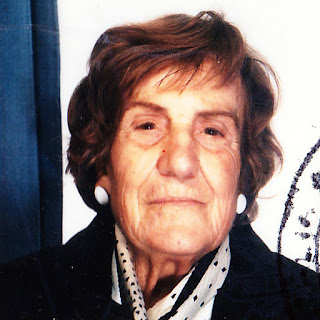 She was a strong, principled, passionate, generous, stubborn and fiercely loyal woman who provided love and strength to her family. She took absolutely no shit from anyone. I adored her.
Nonna was born into abject poverty in the South of Italy in 1915. Real poverty. I don’t think people who go there for their holidays realise how poor that generation actually were.
She brought up kids while her husband was away fighting in WW2, she suffered at the hands of Mussolini, the Nazis, and then liberating armies. Which made her decide she wanted a better life. It was her energy and her strength that galvanized Nonno to leave the South and come to England to find work. She was left on her own with three kids before he called for her. She moved the family from Naples to London and onto Somerset on her own. I loved hearing her tell that story.
She arrived with little money and unable to speak any English.
She worked and she fought. She created a loving home. She provided for us all and she made it clear what was right and what was wrong.
She was the first woman who made it clear to me that Margaret Thatcher was evil. I thank her for that.
It’s only now she’s gone that I realise how important she was in defining me, my values and my politics. No one one else comes close.
I’m not religious but I know she’s with me everyday.
Originally published here.